Most beautiful jewels of Košice

Discover the fascinating highlights of Košice with a spirit of history and famous legends.

Visit the places where life has pulsed since the city was established. Discover the beauty of our home and nature. 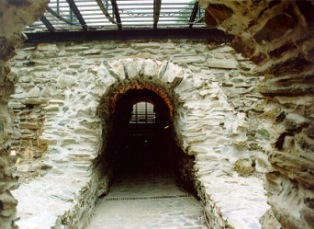 The Dolná brána is so named for the underground museum complex with original gateway to the city and parts of the original town fortifications, which were established in the 2nd half of the 13th century. They were uncovered when the main street Hlavná street was being reconstructed in 1996. Today, thanks to its unique atmosphere the complex is now a place of exhibitions and the traditional Košice Wine Festival in September. 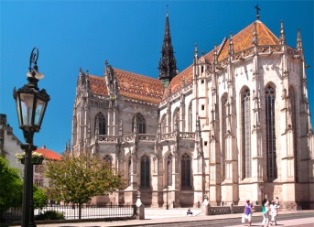 The symbolism of the city’s patron is evident as soon as you visit St. Elisabeth Cathedral. Construction work on the Cathedral started around 1380. It is the furthest east western-style gothic cathedral in Europe, as well as the biggest temple of worship in Slovakia. It houses the fascinating Altar of St. Elisabeth, a rare gothic double spiral staircase – one of just five of its kind in Europe, the crypt of the leader of the biggest anti-Habsburg uprising in the former Kingdom of Hungary, Francis II Rákóczi, and also a sundial from 1477. The frescos and sculpting are the work of master Štefan, a local artist from the 15th century, which adorn its interior and exterior. Thanks to the fantastic view of the centre, climbing the 60-metre high northern tower is well worth the effort. As you come out of the Cathedral and have a good look at its front facade, maybe you can decipher the riddle as to why this Cathedral is unique to the world. 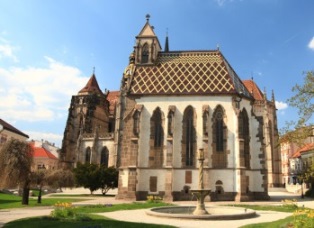 The chapel, which can be found a short distance from St. Elisabeth Cathedral, comes from the 14th century. It represents the culmination of the gothic period and is surprising by its stylish precision, intimacy and harmony. At one time it was surrounded by the city cemetery and contained an ossuary. This is why it is devoted to the escort of souls to the other side, Archangel Michael. His statue depicting the judging of the dead souls is placed above the entrance to the chapel. 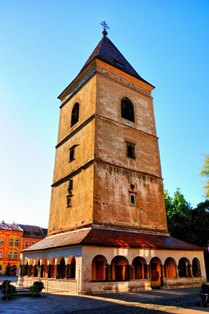 The bell-tower that houses the so-called Urban bell blessed by St. Urban - patron saint of winemakers. It is unique also in the sense that under the porticos there is a lapidarian – gravestones, which are rare examples of Early Gothic to Baroque art. The 45-metre high tower also contains the only museum of wax figurines in Slovakia. 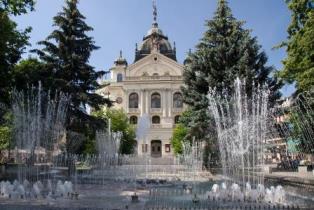 5. Park with musical fountain and carillon:

Every hour on the hour the park resounds with distinctive carillon from the twenty two bells that have adorned the park since 1997. In the summer the singing fountain adds to the musical chorus, lighting up and shooting jets of water to the rhythm after music. 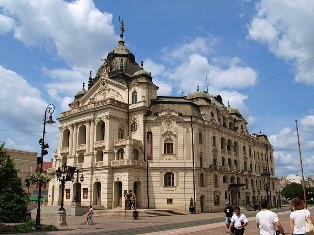 Taking a stroll around the fountain, you will come across the impressive entrance to the National Theatre building designed by architect Adolf Lang. The theatre put on its first performance back in 1899. In addition to the eclectic exterior with Neo-Baroque and Art Nouveau elements, visitors will be enthralled by the rippled interior in the shape of a harp, beautiful components of Art Nouveau and scenes on the ceiling from the plays of world-renowned playwright William Shakespeare, created by Peregrin von Gastgeb from Vienna.

Right behind the theatre you can find the Plague Column of the Virgin Mary from 1723 (Immaculata). The column is situated in a small park and commemorates the gratitude to Mother Mary for an end to the plague epidemic from 1709 and 1710. It is a fine example of a Baroque sculpture surrounded by later sculptures of saints and angels. Legend has it that the bodily remains of St. Valentine are hidden under one of the columns. 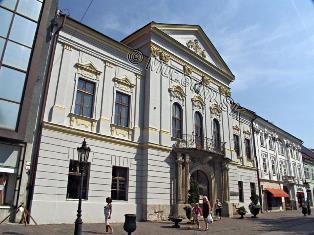 One of the typical features of Košice palaces is the placement of a coat-of-arms on their main facing. The coat-of-arms of the former Abov-Turniansky territorial unit from 1558 adorns the Župný Dom building, which served from 1779 as a centre of the unit. Now a home to the East Slovak Gallery houses, in addition to premises for art expositions, an exquisite meeting room and the smallest public cinema in Košice. 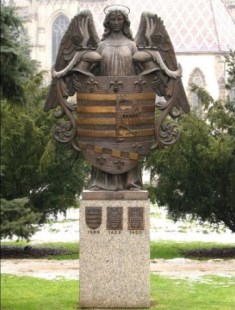 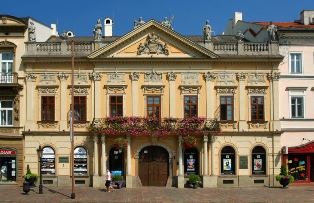 The historic town hall was built from 1779 to 1780 and has a distinct Košice coat-of-arms over the balcony. Inside we can find stunning halls and representational premises of the city mayor, with one of them containing an effigy to the first men of the city from 1982. Passing through the courtyard you will come to the former cinema Fórum/Slovan, the reconstructed covered hall of which now serves for concerts and theatrical performances. The Košice Visitor Centre is situated on the ground floor. 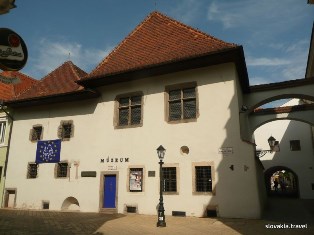 The original two gothic houses with well-reputed pottery workshop were converted in the 17th to the 19th centuries into a prison and torture chamber. In the adjacent underpass over Hrnčiarska street there is the Executioner’s flat (awarded as 2009 Exposition of the Year). Today it houses a museum with the exposition “Košice through the centuries”, where you can experience the mysterious medieval atmosphere. Every year in the middle of May during the event Night at the Museum, the prison comes to life with real wails and screams of prisoners and those being tortured. 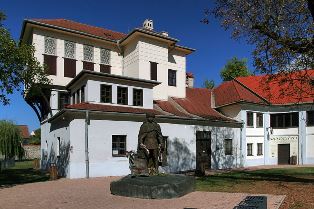 12. The Executioner’s Bastion and Rodošto:

The most stunning example of medieval Košice bulwark and the largest bastion in Slovakia is the Katova bašta (Executioner’s Bastion), which protected one of the entrance points to the city – Maľovaná brána (Painted Gateway). The grounds of the bastion are home to a copy of the Turkish exile home of the last leader of the anti-Habsburg uprising, Francis II Rákóczi, which is named after the former name of his place of exile Rodošto, and which brings a touch of the orient to Košice. If you are interested in your own commemorative coin, announce it in advance at the Rodošto mint and you will have a unique souvenir to take home from Košice.

Experience the unique hideaways of eastern Slovakia with us and discover the enchanting surroundings of the city. 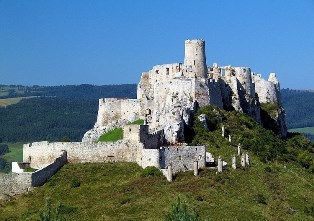 More than 800 years ago the monumentous stone castle had started to rear up imperiously about the sea level of 634 metres. In year the 1780 a great fire undewrote its final indelibe demolition. The castle ruins together with unique environs of Spis territory is since 1993 registered in UNESCO’s World Cultural and Natural Heritage List.

- built after the year 1292 from the initiative of the Ugrian king Ondrej III. In the 16th century the castle was rebuilt to a majestic renaissance fortress. Polish crown jewels were stored in the castle and the famous adventurer Móric Beňovský was confined in there. After a demanding restoration now the whole complex of the castle is open to public. This year exclusively also the most extensive object – the renaissance palace where you can find following unique expositions: a castle brewery and distillery in Stará Ľubovňa. 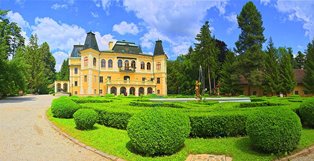 The museum specialises in documenting history of gentry. It sits in a past hunting palace of the Andrassy family (National Cultural Monument), which is situated in a large romantic park in Betliar. The mansion was one of many other gentry houses of the family till 1945. The first building dates back to the first half of 15th century. Soon the building was enlarged. The present shape of the mansion was formed during the last reconstruction at the end of the last century thanks to Emanuel Andrassy.Since the end of 18th century the family started forming, as it was common then among gentry families, a natural park closely corresponding to surrounding nature. 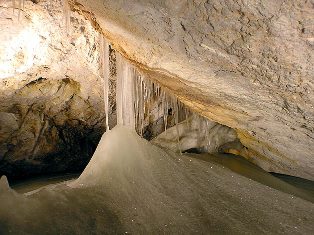 is an ice cave in Slovakia, near the mining town of Dobšiná in the Slovak Paradise. Since 2000 it is included in the UNESCO World Heritage list as a part of Caves of Aggtelek Karst and Slovak Karst site. The cave was discovered on 15 June 1870 by a royal mining engineer Eugen Ruffinyi, accompanied by G. Lang and Andrej Mega, though the entrance was known from time immemorial by shepherds and hunters as Studená diera (Cold Hole). The cave was opened to the public one year after its discovery. In 1887, it was the first electrically lit cave in Europe. 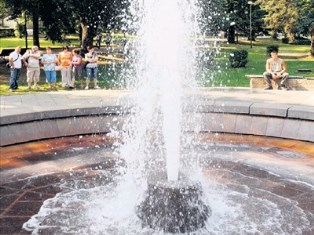 The favourite destination in the environs of Košice is undoubtedly Herľany. The special attraction of this former spa is the famous geyser of Herľany. In the 1870s, an artesian well was drilled here in pursue of another mineral water source for the expanding spa. The 404.5 m deep probe brought up a strong spring of the mineral water. Now the periodicity of emanation is about 32-34 hours. The water springs for about 20-30 minutes to the height of maximum 20 metres. The yield of one eruption is about 600 hl of water.